Established in 1991 A.D. (2048 B.S.) and situated at Sukhepokhari, Harion, Sarlahi, Chaturbhujeshwar Janata Multiple Campus (CJMC) was started with diligent effort of the local people who were conscious enough to run the campus at any cost. Seeing 'opportunity in difficulty' and remaining firmly optimistic of its success to become a renowned campus of the district of Sarlahi bringing opportunity to students of this area for their need of education, skill and wisdom, and for their better enlightened and prosperous future, they became prepared for their contribution to the campus from their side in whatever way they were able: financially, politically, educationally, morally.

As a community campus, CJMC was opened with Intermediate Certificate Level in Humanities and Social Sciences in 2048 (1991). CJMC then started classes of Bachelor of Arts in 2057, Bachelor of  Bachelor of Education in 2060 and Bachelor of Business Studies in 2063. The campus has started classes of Master of Education since 2075. All these faculties have been running currently. It is affiliated only to Tribhuvan University, Kritipur, Kathmandu. The campus follows the curriculum and programmes of Tribhuvan University and follows its rules. It has also developed its own rules and regulations which align with TU rules and regulations.

The campus will continue modernising and be successful to meet the needs of contemporary students who are facing contemporary technological or other issues in life and action. Now it has a favourable time for achieving this purpose as the University Grants Commission (UGC), Sanothimi, Bhaktapur has encouraged and supported it to become involved in Quality Assurance Accreditation (QAA) process in order to achieve assurance of the campus in imparting quality and standard education and equally in assuring the students and the community that it is one of the best campuses in Nepal.

Located close to the East-West High Way in a semi-urban area with moderate climate and beautiful plain landscape near Chure hill,  and established in 2048 B.S. in affiliation with Tribhuvan University, Chaturbhujeshwar Janata Multiple Campus has successfully been imparting higher education to the students coming from different parts of Sarlahi, where it is located, and the neighbouring districts of both  hilly and Terai regions. It is a community campus established with sincere initiation of local education- loving people in the community for providing higher education to students belonging to both economically impoverished and well- to- do families. As a community campus, it is associated with Nepal Public Campus Association as a member campus.

This campus was accredited by University Grants Commission (UGC) Bhaktapur, Nepal in 2079 and has been actively participating in QAA process launched by UGC for higher education institutions in Nepal.

Having been facing various challenges and difficulties in the course of its development for the last 30 years and still moving ahead successfully, the campus has significantly gained fame as the center of providing quality education in diverse academic programmes in the faculties of Humanities and Social Sciences, Management and Education. It has been committed to satisfying the needs and interests of the students and the community by providing quality education and capable human resources to fulfil the need of education and manpower in the national and international job market. The campus has given priority to student – centered activities and facilities so as to make them able to expose and express their immanent competencies, to have understanding of the world around them, and to make them able to compete with other graduates.

Various committees and bodies at the campus together with the community members have worked hard to run the campus smoothly providing financial, moral and political support  in situations of difficulties. Likewise, its experienced and devoted faculties and staff have struggled to achieve fame of the campus as an institution of quality education.

Finally, we would like to extend good wishes to all the students of Bachelor and Master levels and assure them to support and assist in achieving their goals. 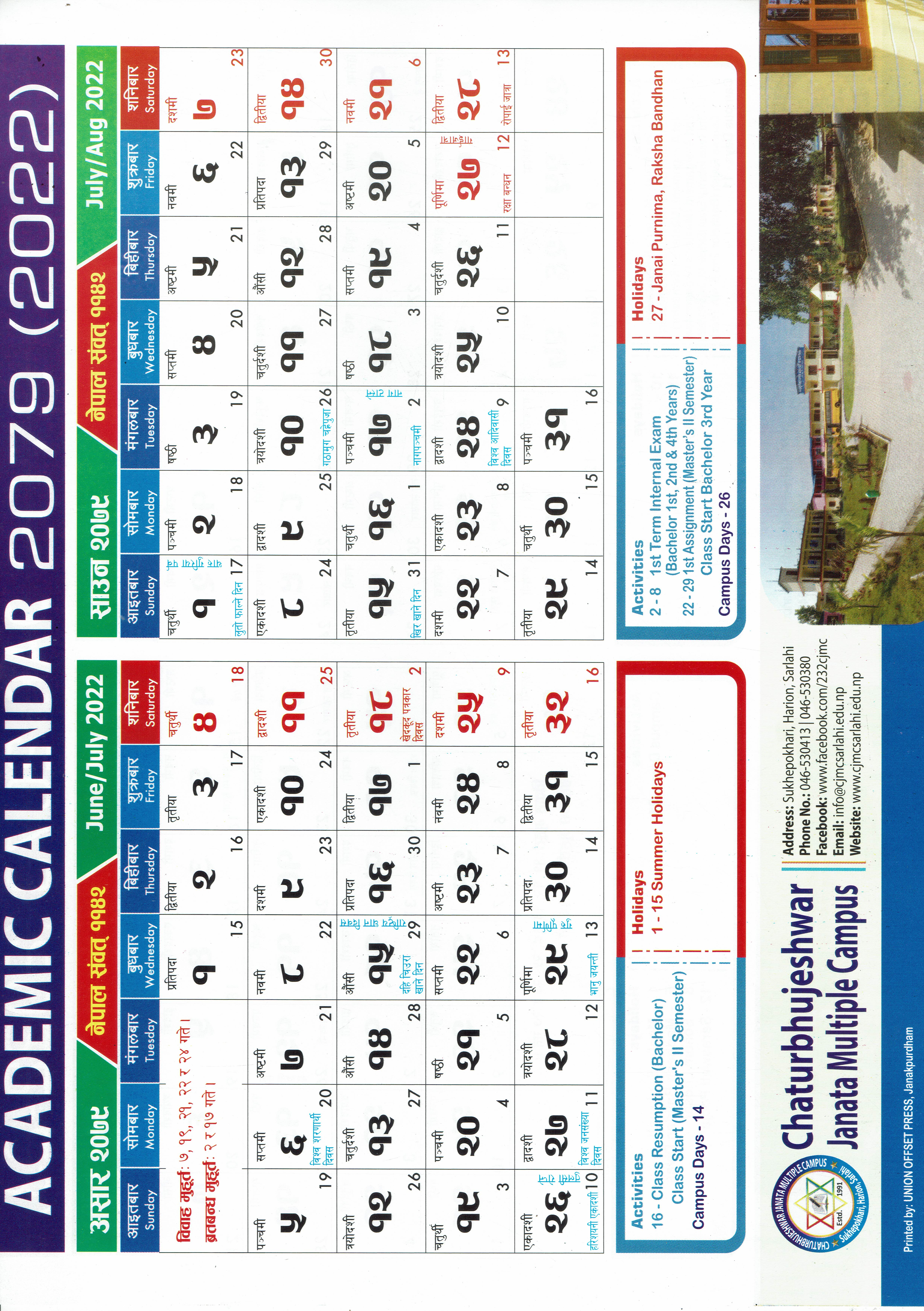 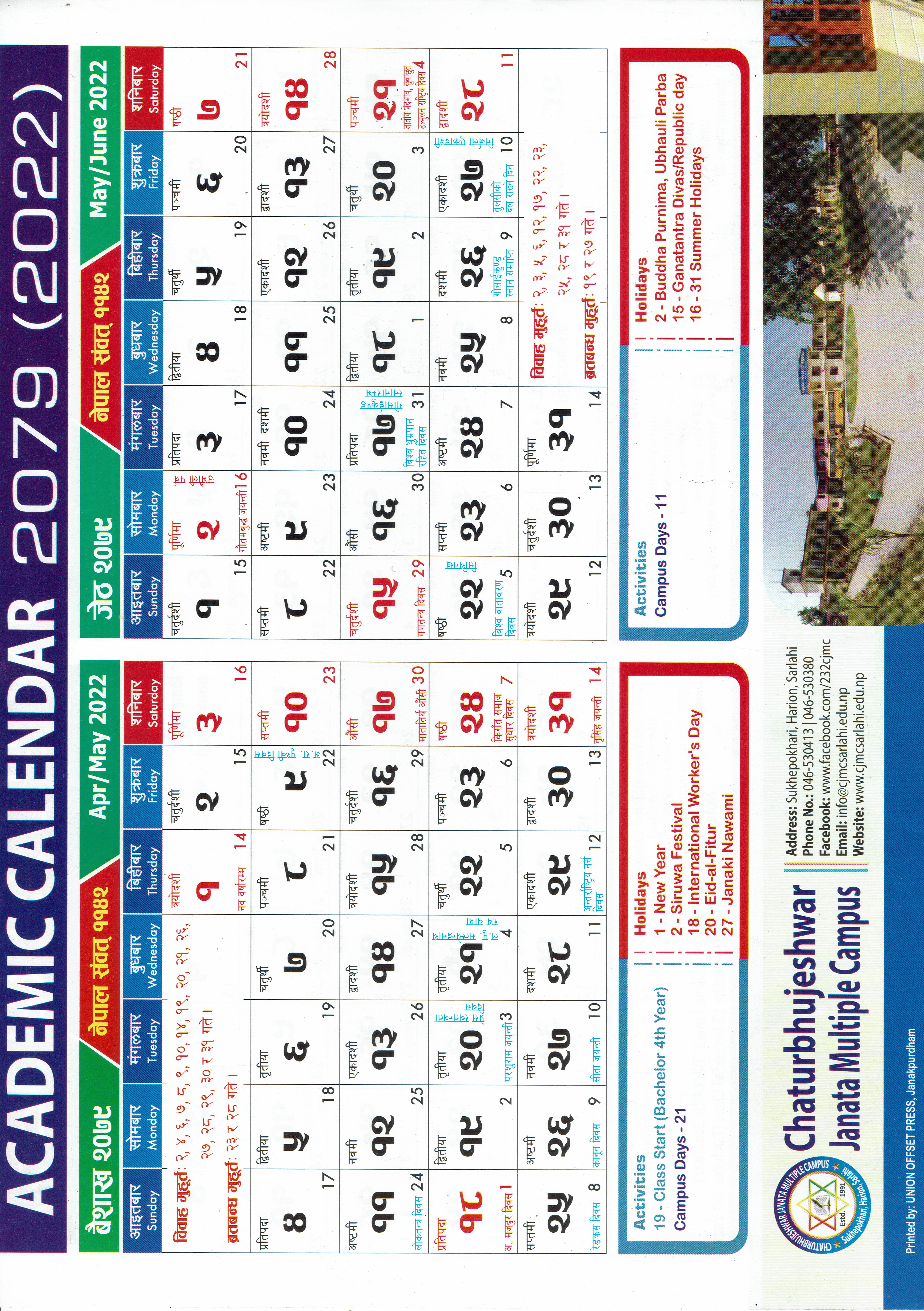 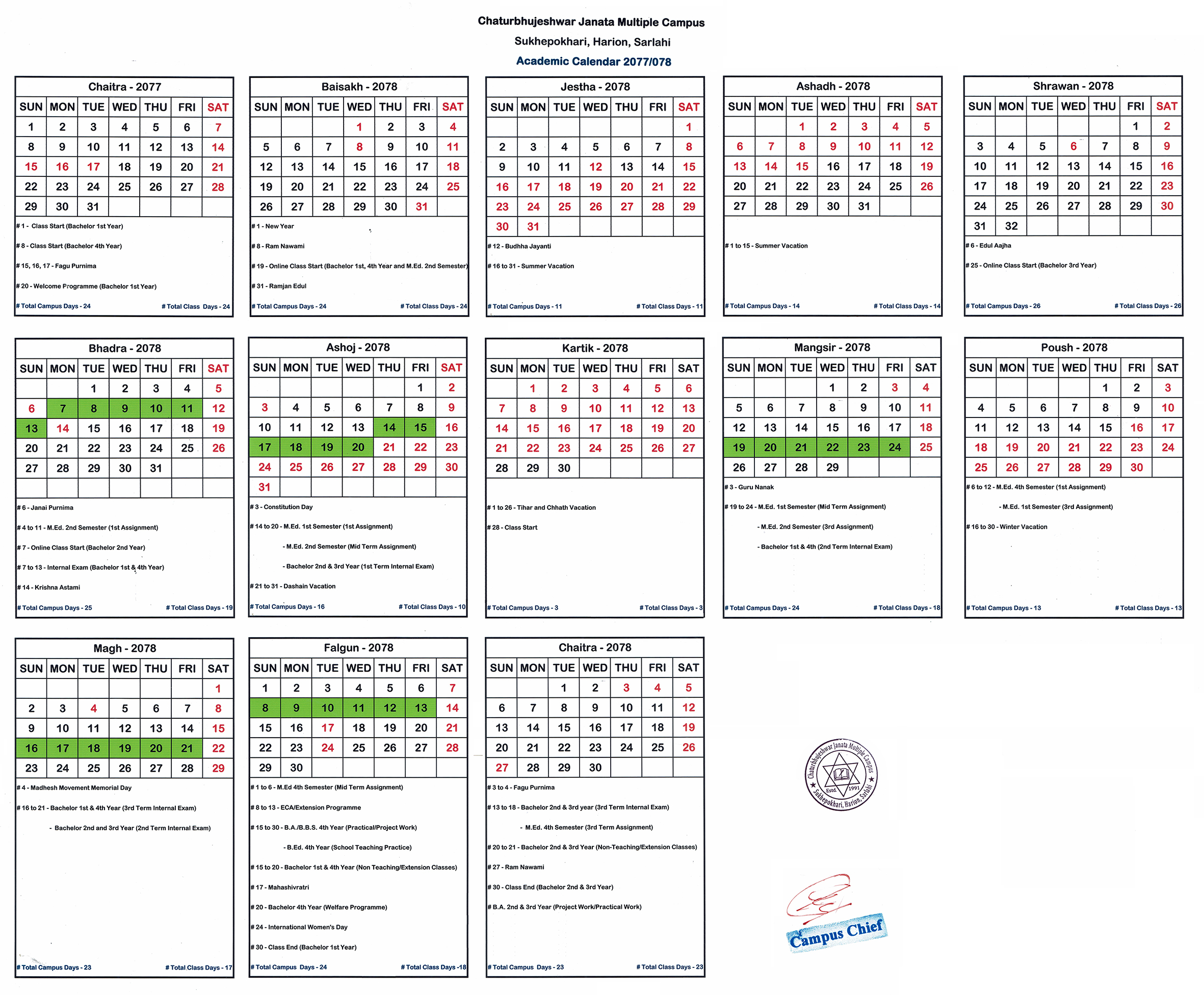 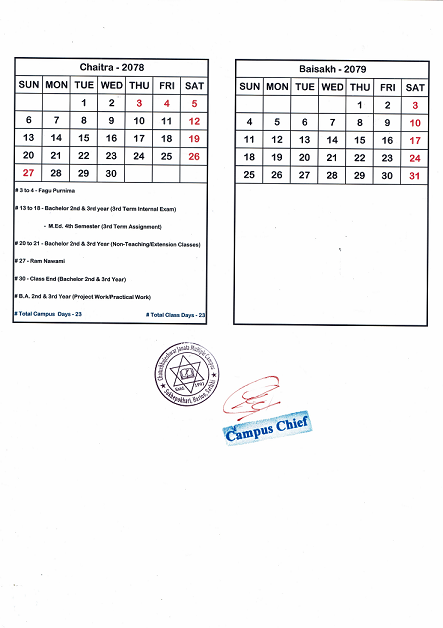 
WHAT OUR STUDENTS SAY ABOUT Chaturbhujeshwar Janta Multiple Campus 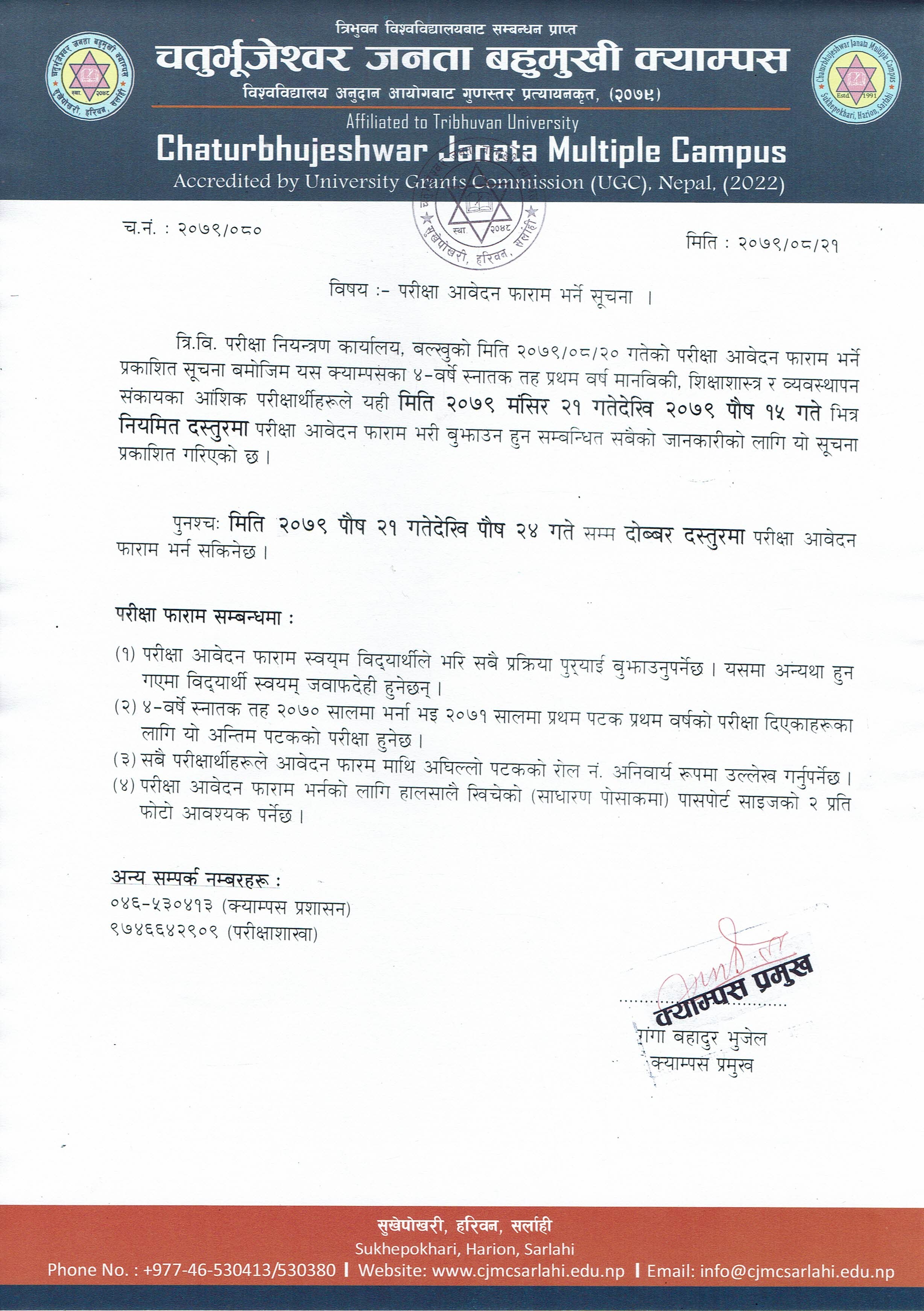 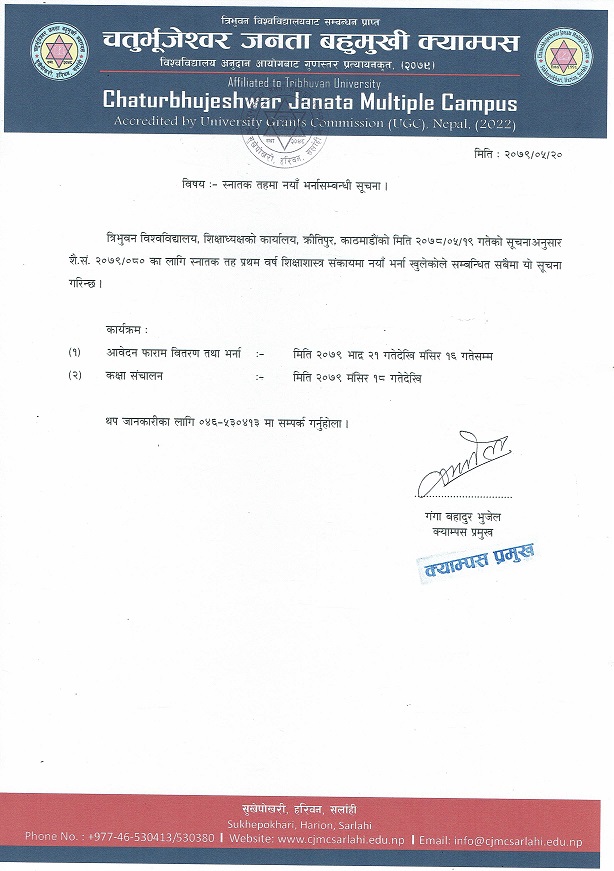 
Tribhuvan University (Office of the Controller of Examinations)